Miss the event? Check out the video!

The $2.6M gift in 2021 marks the largest in the Foundation’s history. Broadway Cares/Equity Fights AIDS is one of the nation’s leading nonprofit AIDS fundraising and grant-making organizations. By drawing upon the talents, resources, and generosity of the theater community, Broadway Cares helps men, women, and children access medication, health care, food, counseling, and emergency financial assistance. Read more here about how Fred’s legacy has contributed to the vital work of Broadway Cares.

Read more about Tidtaya Sinutoke and Isabella Dawis , the 2021 Fred Ebb Award winners, on Playbill and Broadway World. The award will be presented at an invite-only celebration at Birdland on January 3, 2022.

Fred Ebb Award to be Given Virtually on November 30th

Although we cannot gather in person, the Fred Ebb Foundation will present the 16th annual Fred Ebb Award on November 30th to Christopher Staskel & Ben Bonnema and Michael R. Jackson. Please join us! 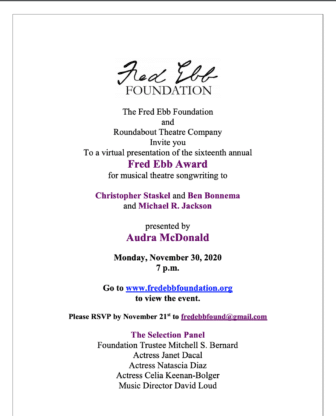 Miss the event? Check out the video!

Miss the event? Watch the video below!

Join us for an evening of Kander & Ebb songs performed by the Chicago National Touring Company. All proceeds will go to the Fred Ebb Foundation and Broadway Cares Equity Fights Aids. Buy tickets here. 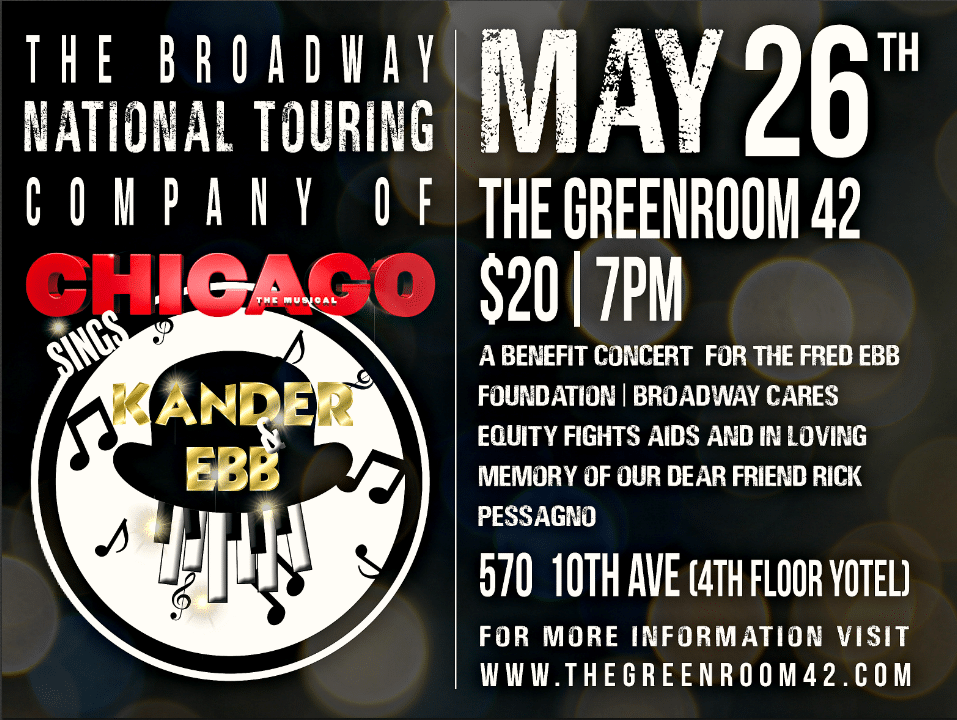 Raised in the green mountains of Vermont, Shaina Taub is a New York-based songwriter and performer.

Her concert work includes a Lincoln Center solo debut in the acclaimed American Songbook series, as well as residencies at Ars Nova and Rockwood Music Hall. Taub has independently released two EPs and a full-length album Visitors, and will play a year-long residency of monthly shows at the Public Theater’s Joe’s Pub in 2017.

As a songwriter, she is a winner of the Jonathan Larson Grant and the first female recipient of the ASCAP Foundation’s Lucille and Jack Yellen Award. She writes tunes for Sesame Street, including Just Like Magic featuring Sara Bareilles. Six-time Tony winner Audra McDonald is currently performs Taub’s song, The Tale of Bear & Otter on tour. Taub’s songs have also been performed by Broadway stars Sutton Foster and Phillipa Soo.

Taub’s original musical adaptation Shakespeare’s Twelfth Night was commissioned by the Public Theater as part of the groundbreaking Public Works initiative and received a critically acclaimed production at the Delacorte Theater in Central Park in which she played the role of Feste. Her original soul-folk opera, The Daughters, was featured in workshop productions at  CAP21 Theater Company, and New York University’s mainstage season. Taub is currently writing a new musical about Alice Paul and the American women’s suffrage movement in the decade leading up to the passage of the 19th amendment.

A fellow of the MacDowell Colony, the Yaddo Colony, the Sundance Institute and the Johnny Mercer Songwriter’s Project, winner of a MAC John Wallowitch Award, a TEDx conference speaker, Taub served on the music theatre faculty at Pace University, and is a University Scholar alumnus of NYU’s Tisch School of the Arts.